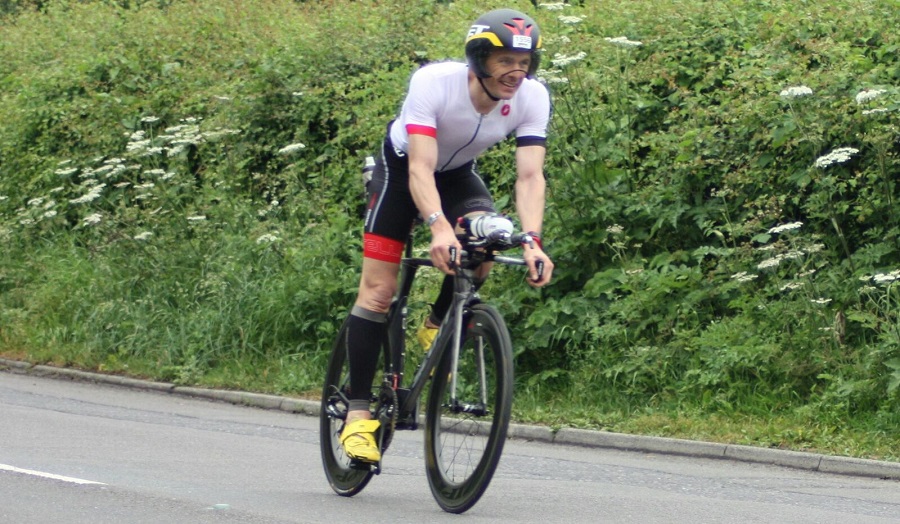 Marcus, Team Leader at Astec Solutions competed in Ironman 70.3 Staffordshire at the weekend, and was first to cross the finishing line in the +35 years range. He was also first in his 40-44 year age group, with a very impressive 22nd overall ranking amongst a total of 2331 triathletes, including many professional athletes.

Despite torrential rain, thousands of spectators and triathletes turned out for the event, determined to not let the weather dampen spirits. The gruelling race began with a one and a half mile swim at Chasewater, followed by a 56 mile bike ride through the Staffordshire countryside before a 13.1 mile run to finish on the Shugborough Estate.

Having competed in his first Ironman race in 2010, Marcus started preparing for this year’s race several months ago with an intensive training schedule to reach a peak level of fitness.

His finishing time of 4 hours 32 minutes qualified him for the world championships in Queensland, Australia this September, although he says he has other priorities at the moment.

“Since 2007 I’ve competed in 2-3 races each year – this is only the second time I’ve done Ironman though. The heavy rain made the bike section tricky, so I’m really pleased with my placing and to have achieved my target time.”

For further information about the Ironman race click here

Share on FacebookShare on TwitterShare on Linkedin
Food & Drink IT Summit
A PSP in Paris: Astec at Minds+Machines

Astec has achieved Microsoft Gold Partner status for another year. The certification required the Astec team to pass new and challenging exams to demonstrate our commitment to the highest levels of customer care and technical proficiency.

What are your most expensive resources in manufacturing? For many, it will be people, equipment, and raw materials. To be more profitable, you need to make the most of these costly elements. In this Fit for the Future series article, we'll be looking at how to improve efficiency, reduce downtime, and increase OEE.

Maintenance is an essential part of any operation. While figuring out when to do maintenance is the purview of smart systems such as Predictive Maintenance, the performance of that maintenance is the responsibility of your engineers. It is here that inconsistencies can appear, be that engineer experience, training, or availability, and begin to have a real effect on your operational performance. So, how can you support your maintenance teams in completing vital work?